How to appreciate those who disagree with us

Home » Chapter 18, Text 03 » How to appreciate those who disagree with us

Avoiding such intolerance, the Gita’s speaker, Krishna, demonstrates respect for those whose opinion differs from his. While discussing whether prescribed sacred duties should be continued or renounced (18.01), Krishna declares conclusively that such duties should be continued, for they can purify even great souls (18.05). Yet he doesn’t condemn those holding the opposite view; he respectfully calls them manishinah, learned people (18.03). Why does Krishna respect them? Because he sees beyond their incorrect philosophical conceptions to what is good in them: their serious spiritual aspirations. They are earnestly pursuing something beyond the material — and that earnestness deserves appreciation, for it is rare (07.03).

Krishna’s example underscores that we need to see people as multi-dimensional beings; their opinions  are only one part of who they are. Instead of reducing them to their opinions, we can stretch our vision beyond our disagreement and seek whatever good is in them. They may be polite; philosophically minded; spiritually inclined; deeply committed to their path; or concerned about something bigger than themselves. What if we can’t find anything good in them? They still are precious parts of God — all living beings are (15.07). For that, they deserve our appreciation.

One-sentence summary:
Don’t reduce people to their opinion, even if it is wrong — see their multi-dimensionality beyond their opinion and appreciate whatever is good in them.

18.03: Some learned men declare that all kinds of fruitive activities should be given up as faulty, yet other sages maintain that acts of sacrifice, charity and penance should never be abandoned. 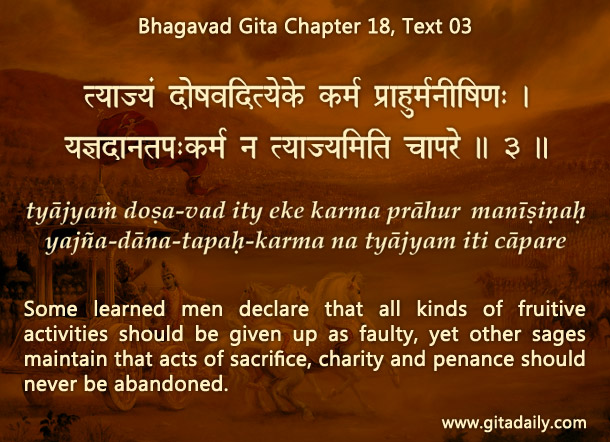